It's our hope, that you take a moment to reflect & enjoy, these mirrors of FloridaPast.
We will do our Very Best to Give you Interesting and Fun Glimpses into FloridaPast.
Some of the images are Links to Our Famed Now & Then Fades.
All will open in new window.

The Various Welcome Entrances of Silver Springs Through the Years
Click anyone of them, and you'll visit our Famed Now & Then Fade

Take a moment, and visit the FloridaPast Facebook thread where we posted this. And we'll learn who the Gent is that is taking the photograph here.
John T. McEarchern III tells us; "My Dad taking the picture!!" "He Worked there for over 10 years. Notice the Shirt!!"

Clicking this image will bring you to FloridaPast Facebook Album of Silver Springs
The following two images are of an original Live Reptile Shipping Crate, courtesy and permission to use by Jake Burchell of Facebook.

The Early American Museum was once known as the Carriage Calvacade. Vernon Jarvis owned a collection of roughly 100 antique carriages and various other motor cars. Sometime during the 1980s era, the estate sold the collection to the Silver Springs Attraction. Which moved the museum to the old Morrison's Cafeteria building on park grounds. The original curator of the museum was Sidney Strong. Sometime later, the position was held by Dick Mauller.

"If you want to see the Boiling Springs Ladies Parlor, Take a Boat"

Above are a couple of billboards for Paradise Park, which was a segregated African-American Attraction. And was located about 1 mile down the Silver River from Silver Springs. Seven Miles east of Ocala on Road 40.
We would have seen the billboard here,(left) at the intersection of U.S. 301 and U.S. 441 as we head toward Ocala. And the sign on right would be as we turn off of 40 at Silver Springs.
Paradise Park was developed by a man named Carl Ray and W.M. "Shorty" Davidson, both Co-owners of the famed Silver Springs for nearly forty years. Paradise Park opened May 20, 1949 and stayed open until 1969.
African-American families, church groups, and tourists came from all over Florida and the United States to visit. 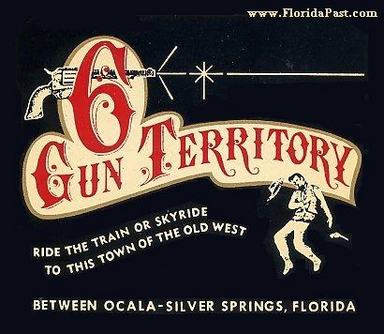 A 6 Gun Territory Promotional Decal, from back in the FloridaPast Daze

A Wonderful presentation of Homosassa History can be found by Clicking Here. Some Fantastic Old Photographs, showing what was once, with history.

This site brought to you by WorldWideCollectAbles.com, FloridaPast.com Copyright © 1998-2017
​Sharing is Encouraged. Please cite sources. Some images/text are under copyright on our site.
home/about us/contact us/faq